The Ultimate Guide To Improving Supermarket Waste in 2019

Food waste is a growing issue which major supermarkets need to overcome in order to improve the sustainability of their operations. Conquering this challenge is not straightforward, but as 2019 gets underway there are more solutions available to tackle it than ever before. So what are the causes of food waste at the moment and what steps can be taken to make the industry more efficient and eco-friendly?

To work out how to solve the food waste conundrum, it is first necessary to look at the catalysts that drive it and the victories that have already been achieved. There are a number of factors that result in waste throughout the journey that food takes from the field and the farmyard to the forks of consumers. Supermarkets are in an enviable position of being able to wield significant influence throughout, hence the mounting expectations over ameliorative action being taken by the big chains.

One of the early pitfalls is in the production process, where problems with machinery can write off up to 9 per cent of the total output at factories. Blockages within specialised equipment and errors which lead to entire runs being discarded are surprisingly commonplace, which is not just wasteful but also expensive for supermarkets and their suppliers. Since these costs are often passed on to consumers, if a machine suffers a fault then everyone suffers.

Issues with the quality of processed foods do away with a further 3.5 per cent of output. Some rejections are solely based on how the product looks, which is clearly a subjective sticking point that might be addressable with relatively minor changes. Others are hygiene-related; an area in which there is little room for manoeuvre as protecting consumer health is of paramount importance.

Trimmings which are generated during production that cannot be reused represent a small but significant slice of waste. A lot of work goes in to optimising production lines to prevent this, yet there are always fresh innovations emerging that can drive this down even further.

When products finally reach supermarket shelves, the key challenge comes in the form of the dreaded sell-by date, or an equivalent ‘best before’ recommendation. Campaigners have claimed that these labelling practices are both misleading and confusing, which is why a number of supermarkets have done away with them for fresh produce. Making such changes for chilled and processed foods is tougher, although if current efforts maintain their momentum then this is not out of the question.

Another setback that supermarket foods can face comes in the form of market fluctuations and unforeseen ordering issues. When cancellations are issued or levels of demand are poorly predicted, entire orders can be written off and end up wasted. This is arguably a distribution-level issue that comes down to poor planning; later on we will see how automation is helping to address it.

Perhaps unsurprisingly the biggest culprits behind supermarket food waste are chilled goods. Ready meals and food items which need to be kept refrigerated pose all kinds of problems both in terms of storage and accurate forecasting of demand. Over a tenth of waste in the sector is contributed solely by products from this category.

With awareness over the food waste issue growing, supermarkets are under increased scrutiny and face outside pressure to overhaul their practices. Pledges made by the major brands will see food waste in the UK halved by 2030.

Efforts made by Tesco have been especially impactful in this area, with the firm coming out on top of a recent study of food waste prevention. In 2017 it donated 8000 tonnes of food to good causes and has been transparent about its practices, with independent auditors monitoring and verifying its performance.

The fact that it was the first UK supermarket to subject itself to this level of scrutiny shows that the problem of food waste has only come to widespread attention relatively recently. Indeed it was a 2013 study from Tesco which revealed some of the most potent statistics that have since fuelled many of the subsequent changes. Analysis found that a staggering 41 per cent of its bakery output was wasted. Bagged salad waste levels sat at 68 per cent at this time, with consumers accounting for over a third of this figure.

Such revelations helped to kick-start the current drive to make supermarkets less wasteful and it is apparent that progress in this area has been significant, even if there is still a long way to go.

The scale and scope of the nation’s food waste dilemma certainly seem daunting, but the ways in which suppliers and supermarkets are dealing with it are suitably innovative.

Collaboration could be the key to overcoming inefficiencies that lead to waste; leading firms have agreed to work together to share resources and data so that there are fewer issues throughout the supply chain. Making information about waste accessible to other organisations will allow for deeper analysis to be carried out and actionable conclusions to be drawn across the industry. It is not just supermarkets that are joining forces; farmers, manufacturers and third-party distributors are getting around the same table to work towards a more sustainable future.

Cutting-edge technology is also proving to be a huge help at slashing waste, specifically with regards to inventory management. Automation is enabling a software-powered approach to finding improvements and creating completely customised distribution strategies. Such an approach helps to pick up on problems which were completely unavoidable in the past largely because they were invisible. The might of big data solutions makes drilling down into important metrics much less labour intensive and supermarkets have the resources to make this achievable.

So far the efforts to cut waste discussed have had an impact before the food arrives in the store, but there are still hurdles to vault in a customer-facing context. One wasteful sales technique which has been criticised and gradually dismantled in recent years is that of throwing out any product that does not conform to arbitrary levels of aesthetic perfection. Morrisons has championed the provision of misshapen fruit and veg to customers, singling it out as ‘wonky’ yet emphasising the fact that it is still completely edible. Allowing conscientious, unfussy customers that choose it to also benefit from a price cut is an added benefit that helps shift produce that would otherwise go unsold.

Then there is the altruistic angle. Supermarkets that might previously have binned out-of-date food on a daily basis now jump at the chance to distribute it to charities, allowing products to nourish those in need without eating into the profits of the organisation as a whole.

We already discussed the significant boost to the donation efforts of Tesco that has been seen over the past couple of years. While the firm did not meet its target to put an end to the wasting of edible food, it came admirably close to achieving this ambitious goal and is endeavouring to pursue further efficiency improvements going forwards. Many of its competitors have followed suit and it is now largely unthinkable that edible food would be trashed for no good reason other than the sell-by date printed on the box.

At a time when foodbank use is on the rise, it is not just homeless people who can benefit from the kinds of donations that supermarkets are now providing. Young families in which parents are skipping meals and children are often not getting the nourishment they need can more easily feed themselves thanks to the measures that have been put in place to stifle food waste. The fact that food banks are even necessary in the first place is something the country should collectively face up to, even if supermarkets are stepping in to take up the slack through their charitable efforts.

Considering the human aspect of this issue is perhaps the most effective way to frame it, rather than relying solely on the dry stats about land use and the complications that come with trying to explain the environmental impact made by carbon emissions. If people can be helped directly by making sure that supermarkets are less wasteful, the advantages should be obvious to any observer.

Even with all the advances that have been made in the past few years, supermarkets still generate a lot of waste; 15 billion tonnes of produce needs to be disposed of each year and this figure is not falling as fast as many campaigners would hope.

Until improvements are rolled out higher up the supply chain hierarchy, it is sensible to ensure that this waste can be processed in a way that cuts carbon emissions and saves cash.

The biggest complication is volume; the more space that the waste takes up, the more expensive it is to transport and the more fossil fuel is burnt to achieve this. Reducing waste volumes leaving supermarkets takes time, so it is quicker and more efficient to take this on with modern hardware. 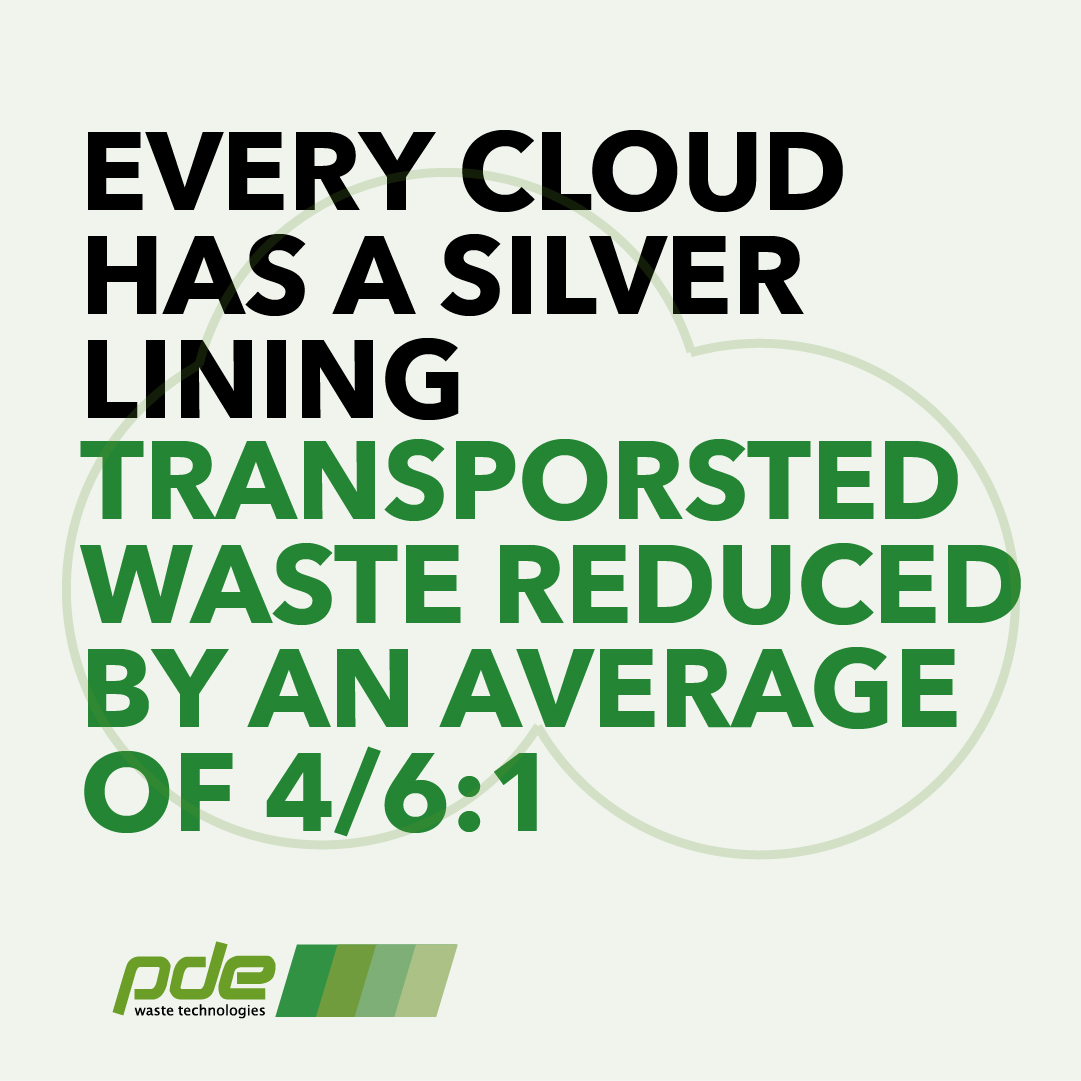 That is where PDE Waste Technologies comes into the picture. It has developed compelling compactors that can take all types of waste and turn them into much more manageable sizes prior to transport. On average it achieves a reduction ratio of 4/6:1, which has a range of obvious benefits for clients.

Firstly, when food waste is compacted so that it takes up less space, more of it can be transported at once without having to invest in larger vehicles or increase the number of trips that are made. This results in cost savings since fewer journeys are required to transport the same amount of produce from the store to the processing facility.

Secondly, by minimising transport requirements, the compactors make the carbon footprint generated by getting waste where it needs to go much smaller. For organisations that are eager to make their operations less of a burden on the environment, which is clearly a concept that can be marketed to their customers, such an approach makes a lot of sense.

Thirdly, the compaction system is not only powerful enough to achieve excellent compression rates but also offers an industry-leading level of hygiene. Supermarkets need to adhere to strict regulations in this respect, while also attempting to prevent the smells associated with waste food from reaching the sensitive noses of customers. PDE takes all of this into account, creating a clean, hassle-free solution that is just as effective for dealing with food as it is compacting general waste.

It is apparent that the food waste problem will not be solved overnight, nor remedied by a single solution. Lots of small changes and improvements need to be made, with supermarkets working together and collaborating with suppliers to embrace a multifaceted approach which starts at the farm and ends at the waste processing facility.